USB microphones have been making their way into small home studios, podcasts, and YouTube video making for years.

They are plug and play, meaning that you don’t need to install any drivers for them to work, and you don’t require any extra gear, like an Audio Interface or a Mixer.

The only issue is that there are way too many to choose from, and this is why I wrote this post; to tell you all the specific differences between the Samson G-Track Pro as well as the Rode NT USB.

The Samson G-Track Pro offers three different polar patters; Cardioid, Omni- and Bi-Directional, as well as an instrument input on the back, and you can record the instrument and mic inputs separately to your DAW with it.

The Rode NT USB only offers a cardioid polar pattern, it doesn’t come with a Gain control which is far from ideal, and both the build- and sound quality are lower.

This microphone has been released fairly recently, and therefore is a bit different than all the other USB microphones out there.

The main feature that sets the Samson G Track Pro apart from all other USB microphones is its built-in interface that lets you record the vocals to one audio track as well as a guitar or bass guitar through the instrument input on the back to another track.

You can also decide to record both of them blended on to a single track as well.

More on this in a bit!

Now, let’s take a quick look at the build quality:

This microphone has probably the best build quality I’ve seen so far of any USB mic, especially if you consider the price; it’s all metal and very heavy, plus the mic desk stand -which already comes installed on the mic- is very heavy, meaning that it won’t slide around the desk easily.

One con about the mic desk stand is that it doesn’t have any padding on the bottom, and this just means that if you bump against the desk, those vibrations will be picked up by the microphone and make their way into the recording.

Other than that, the build quality is simply excellent.

One of the reasons that this microphone is so popular is because of its versatility, since it features three different polar patters; Cardioid, Omni-Directional and Bi-Directional (or figure 8).

In addition to this, it comes with a built-in audio interface that lets you record the mic input as well as the instrument input simultaneously to different tracks.

You can also choose whether you want both tracks to be blended and recorded to just one track in your DAW, or if you want to multi-track them (separate tracks).

This is achieved via the “Mono or 2 Track” switch on the front; Mono will record each track individually and you will have to select “Input 1” in your DAW to record the microphone, and “Input 2” on another track to record the instrument input.

Selecting the 2 Track configuration will blend both signals into one track, but I wouldn’t recommend this since it leaves little to no room for processing, etc.

The two issues I found with this microphone are; it doesn’t reject background noise all that well, and the Omni-directional and Bi-directional polar patterns lose a bit of quality in terms of frequency response.

However, 90% of the time you will be using the cardioid pattern anyway, so no worries there.

Lastly, on the back it comes with a headphone output that can be used for zero-latency monitoring which really comes in handy while recording.

For any voice-related applications, I think that it just sounds fantastic since it doesn’t color the sound all that much; It does have a slight boost in the upper frequencies, but almost all microphones have that slight boost in order the help the vocals to better sit in the mix.

As far as mic’ing up guitar cabinets, it actually performs a lot better than expected, and even when recording acoustic guitar, it also did a more than decent job.

However, for recording acoustic guitar I prefer the Blue Yeti… (You can red my comparison of the Blue Yeti and the Samson G-Track Pro here).

Additionally, this microphone is plug and play both on Windows 10 and MacOS, meaning that no drivers are needed; simply connect it and it works.

Lastly, since it works as a regular audio interface, you can use it with amp simulation software on the instrument track, and my concern here was latency, but it definitely wasn’t bad at all!

So, overall, it’s a pretty versatile microphone that is insanely well built and that also sounds surprisingly well!

You can check the price as well as the reviews of the Samson G-Track Pro on Amazon here.

Rode is known for making extremely high-quality equipment at reasonable prices, and the Rode NT USB is no exception to this rule, except for one thing, which I’ll mention in a second.

It comes with a pop filter, which is extremely good, a tripod desk stand, a ring mount, and a storage pouch.

The two controls on the side are for the headphone volume, which comes in handy when you want to do zero latency monitoring, and the Direct mix control between mic input and source output.

This means that you can choose to hear only what’s coming out of the PC, to only hear the direct signal from the Mic, or a blend of those.

Now, you might have noticed that it doesn’t come with a Gain dial, which for a mic in this price-range is just ludicrous.

In all honesty, I don’t like this at all…

You can control the levels from your PC however, but this isn’t ideal it simply takes too much time.

This microphone is ideal for recording singing, as well as spoken word; such as podcasting and voice-over.

When looking at the build quality I have to say that it’s quite good; not AS good as the Samson, but no complaints here.

It’s got some weight to it and it doesn’t feel at all flimsy or delicate.

Like I mentioned, it includes a pop filter which is rare since most microphones don’t include one, and even though it feels a bit flimsy it’s still a free pop filter that really works.

Now, since it’s only got a cardioid pickup pattern, it’s not as versatile as the Samson, plus the sound quality isn’t as good as I would have expected it to be.

Lastly, it works on Windows and Mac OS based computers, as well as the Apple iPad.

How does it perform?

To be honest, I wasn’t as surprised as I thought I would be when trying out this mic.

For spoken word applications or for quiet singing it works super well, however when recording instruments that are a bit too loud, or any other loud sound source for that matter, even if the signal doesn’t clip it will sound as if it’s clipping.

Also, having no Gain dial makes it a bit of a pain to set the levels correctly, and in addition to this it only features one cardioid polar pattern.

Other than that, I think that the Rode NT USB does a pretty decent job at doing what it’s supposed to do, just remember to not record very hot signals.

What comes in the box?

Here’s a link to Amazon where you can check the price and the Reviews of the Rode NT USB.

Which one is right for you?

The Samson G-Track Pro is the obvious winner here;

The additional pickup patterns, the instrument input on the back, and the overall better sound quality just can’t be ignored.

Plus, they sell at very similar price points; in fact, the Samson is usually more affordable.

Having an instrument input means that you can actually use it as a regular audio interface to record a vocal track plus an electric guitar/bass track at the same time, and you can even use amp simulators in real time while recording.

If I were you, I’d definitely go with the Samson G-Track Pro, no questions asked.

Like I just mentioned, I feel like the Samson G-Track Pro is just miles ahead of the Rode.

However, if you’re looking for a simple cardioid condenser USB, then you might want to consider the Audio-Technica AT2020 USB.

This one is definitely not as versatile as the Samson, but it does sound fantastic as well.

Here’s a post where I compare the AT2020 USB to the Rode NT USB that you can also check out.

I consider both of these microphones, the Heil PR40 and the Shure SM7B, to be one of the best dynamic microphones available today. They work…

The ZEDi mixers are ideal for any small home studio, especially if you’re someone who is just starting out since they are small and easy…

Building your first home studio is a challenge, the gear is expensive, it’s very time consuming and unless you really know what to buy, you…

With the rapid advancement in technology, the market is constantly  throwing  new options in our face, which is a good thing, but it can also…

Tablet controlled-, or wireless mixers have become very popular over the last years. Being able to leave the mixer on stage near the musicians without… 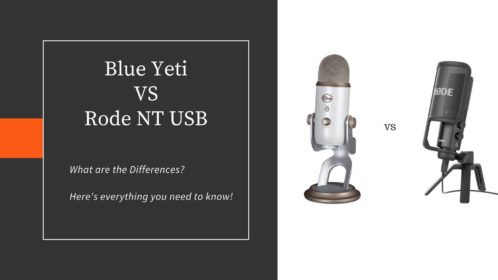 The Blue Yeti and the Rode NT USB are two of the most popular USB microphones on the market. Now, they are very different and…