USB microphones are famous for being plug and play devices that don’t require any extra gear, such as an audio interface or mixer, to work.

The Blue Yeti is probably the best-known USB mic of all time, but there are definitely a couple other ones out there that are just as good, or even better in some cases.

In this post I will compare the Blue Yeti to the Samson G-Trak Pro to give you a rough idea of which one you should go for.

Let’s take a quick look at their differences and then I will get into the specifics of each mic:

The Samson G-Track Pro features Cardioid, Omni- and Bi-directional polar patterns and it comes with a built-in audio interface that lets you record the microphone and the instrument inputs to separate tracks in your DAW.

The Blue Yeti features four different Polar Patterns; Cardioid, Omni- and Bi-directional, as well as Stereo, but it doesn’t come with an instrument input (You can only record one track at a time).

This microphone has been released fairly recently, and therefore is a bit different than all the other USB microphones out there.

The main feature that sets the Samson G-Track Pro apart from all other USB microphones is its built-in Audio interface that lets you record the vocals to one audio track as well as a guitar or bass guitar through the instrument input on the back to another track.

You can also combine both and record them on to one track, but more on this in a bit!

Now, let’s take a quick look at the build quality:

This microphone is probably one of the best built ones I’ve seen so far, especially if you consider the price; it’s all metal and very heavy, plus the mic desk stand -which already comes installed on the mic- is very heavy, meaning that it won’t slide around the desk easily.

One con about the mic desk stand is that it doesn’t have any padding on the bottom, and this just means that if you bump against the desk, those vibrations will be picked up by the microphone and make their way into the recording.

Other than that, the build quality is simply excellent.

One of the reasons that this microphone is so popular is because of its versatility, since it features three different polar patters; Cardioid, Omni-Directional and Bi-Directional (or figure 8).

In addition to this, it comes with a built-in audio interface that lets you record the mic input as well as the instrument input on the back of the mic simultaneously to different tracks.

You can also choose whether you want both tracks to be blended and recorded to just one track on your DAW, or if you want to multi-track them (separate tracks).

This is achieved via the “Mono or 2 Track” switch on the front; Mono will record each track individually and you will have to select “Input 1” in your DAW to record the microphone, and “Input 2” on another track to record the instrument input.

Selecting the 2 Track configuration will blend both signals into one track.

The two issues I found with this microphone are; it doesn’t reject background noise all that well, and the Omni-directional and Bi-directional polar patterns lose a bit of quality in terms of frequency response.

However, 90% of the time you will be using the cardioid pattern anyway, so no worries there.

Lastly, on the back it comes with a headphone output that can be used for zero-latency monitoring which really comes in handy while recording.

For any voice-related applications, I think that it just sounds fantastic since it doesn’t color the sound all that much; It does have a slight boost in the upper frequencies, but almost all microphones have that slight boost in order the help the vocals better sit in the mix.

As far as mic’ing up guitar cabinets, it actually performs a lot better than expected, and even when recording acoustic guitar, it also did a more than decent job.

However, for recording acoustic guitar I prefer the Blue Yeti… More on this in a bit!

Additionally, this microphone is plug and play both on Windows 10 and MacOS, meaning that no drivers are needed; simply connect it and it works.

Lastly, since it works as a regular audio interface, you can use it with amp simulation software on the instrument track, and my concern here was latency, but it definitely wasn’t bad at all!

You can check the price as well as the reviews of the Samson G-Track Pro on Amazon here.

Blue Microphones is known for making excellent quality, and cool-looking microphones which certainly aren’t as expensive as some others out there.

The Blue Yeti (Link to Amazon where you can check the current price) is their most famous microphone which works through USB and is plug n’ play, meaning that all you need to do is connect it and that’s it, it’s ready for use.

It will work perfectly both on Windows and Mac OS.

The build quality is great, it feels very durable and not like some cheap microphone, although I must admit that it’s not as sturdy as the Samson.

It features a multitude of pickup patterns like cardioid, omnidirectional, stereo and bidirectional, which makes the Blue Yeti an incredibly versatile microphone, especially for the price range.

You can get it in four colors; Silver, Blackout, Whiteout and Cool Grey.

It is not only an excellent microphone for podcasters, YouTubers and Voice-over artists, but it’s also pretty good for recording music… emphasis on pretty good.

This microphone also comes with a Gain control, mute button and a zero-latency headphone output, which is on the bottom.

However, and this is a big difference between the Blue Yeti and the Samson, it doesn’t feature an Instrument Input.

All the knobs are easy to use, and you can quickly tell how much- or how little gain you’re dialing in.

The reason the Blue Yeti is a great option for recording music is, apart from its good sound quality, that it can record in stereo.

Why is the stereo pattern so useful?

We usually record acoustic guitars, pianos, etc. using two pencil condenser microphones which, when combined, give us some of the best sounding stereo recordings.

While the Blue Yeti won’t give you the exact same results as the two pencil microphones, it will certainly give you a better result than recording with a single cardioid microphone.

Another plus is that if you already own a cardioid microphone you can use the omni setting on the Blue Yeti and record with both of them at the same time, using the mid-side technique, which is an excellent way of creating a stereo recording.

The Blue Yeti is very easy to use and doesn’t require any technical knowledge to be configured, just connect and use without the need to worry about any drivers or latency issues.

The sound quality is very good considering the price, plus having four different pickup patterns allows for a lot of versatility.

I liked it especially for voice-related applications but not so much for recording music.

This is because even though the stereo pickup pattern can come in handy when recording something like an acoustic guitar, I just didn’t like the way it sounded as much for anything else; It doesn’t sound as bright as I would have hoped, and for recording guitar cabinets I’d definitely stick to the Samson.

That’s why I said that it sounds “good” and not “great”.

Another alternative would be the Rode NT USB, and I even did a comparison between it and the Blue Yeti. Make sure to check out that post.

If you’re looking for a versatile microphone, then it might be a good idea to go for the Blue Yeti.

Make sure to check the current prices on Amazon here.

To my ear, the Samson G-Track Pro sounds better than the Blue Yeti, and even though it doesn’t feature the stereo polar pattern (all other patterns are the same), I just think that it’s better-sounding overall.

The build quality is also slightly better on the Samson, and since it features an Audio Interface that lets you record the microphone and the instrument input separately to your DAW, I jut think that it offers a better value.

Which is the best one for you?

The Samson is overall the better choice. However, if you plan on recording acoustic guitar, then the Blue Yeti comes out ahead because of the Stereo polar pattern.

But for voice-related work, as well as for overall recording purposes, I think you should choose the Samson G-Track Pro.

Finding the right microphone for your needs can be quite a challenge, especially when you’re on a tight budget.

I go through this every time I decide to get a new XLR microphone or a new Audio Interface, and I always hesitate before purchasing.

The Samson G-Track Pro is a fantastic mic, so is the Blue Yeti, but at least to my ears, the Samson is better.

If you know that you won’t take advantage of the built-in audio interface of the Samson, or of the different polar patterns for that matter, then consider the Audio-Technica AT2020+, which is the USB version of the famous AT2020.

You’re thinking about getting some studio monitors but you wonder if you really need them in order to record and mix music, since most of…

Both of these microphones are extremely popular, the SM58 is probably the most famous microphone of all time and for good reason. Both of them… 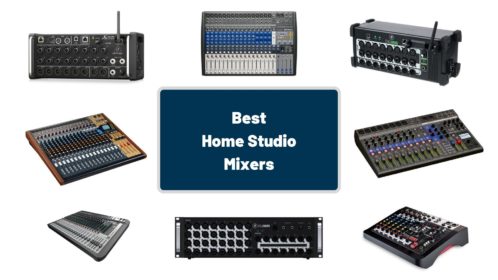 Finding good mixers for your home studio can be quite a challenge, especially if you’re looking for ones that can do some multi-track recording… Meaning…

Mixers with motorized faders are great for recalling the settings of a previous session as well as giving you the option, in many cases, to…

This is a question I asked myself a long time ago and I assume that many of you have the same question now, so, I…