USB Microphones have become extremely popular over the past few years, especially for creating YouTube videos, doing Voice Over work, and even for home recording.

In this post I will be comparing two of the best-known USB microphones; The Audio-Technica AT2020+ and the Rode NT USB so you can get a better understanding of which one you should go for, and yes… there is a winner.

So, without further ado, let’s get started!

The AT2020+ has a crispier and brighter sound, whereas the Rode NT USB sounds a bit darker.

However, the most important difference is that the AT2020+ features a Gain Control that let’s you choose the level at which you will be recording at.

The Rode NT USB doesn’t have a Gain Control, and this can lead to clipping of the signal if the source is too hot.

There are few better-known brands in the music industry than Audio-Technica.

They make some of the best microphones on the market and the AT2020 is the go-to mic for almost every beginner home recording enthusiast, plus you won’t see a studio that doesn’t have at least a couple of them.

The USB version of the Audio-Technica AT2020 is just as good as the XLR AT2020 with the advantage of being a plug n’ play microphone which works both on Windows and Mac OS.

It comes with a built-in headphone jack and a volume control that allows you to directly monitor your microphone signal with no delay.

It also offers a mix control that blends the microphone and the pre-recorded audio.

The controls on the AT2020 aren’t as easy to use as I would have liked, since you can’t really tell how much gain you dialed in by just looking at it.

One thing I like about the AT2020 is that it’s a small and lightweight microphone, which makes it an excellent microphone for travelling and recording on the go.

Just like all the Audio-Technica microphones, the AT2020+ is extremely well built.

When holding it in my hand it doesn’t feel like a cheap product at all, quite the opposite actually.

The AT2020+ can be used for anything voice related, recording music, YouTube videos, etc.

Since the AT2020 is a plug n’ play microphone, you should have absolutely no issues getting it to work; simply connect it and that’s it, you can now record!

The sound quality is excellent, and I mean excellent, especially considering the price, since you probably won’t find another USB microphone at this price range that sounds like it (more on the price in a bit, since it depends where you’re buying it).

The only thing I don’t like that much is that it can sound a bit crispy at times, but that isn’t that much of an issue really, since you can fix that with just a bit of EQ afterwards.

I often refer to the AT2020+ as my top recommendation for anyone who is looking for a cardioid condenser USB microphone simply because of the overall sound quality.

It records vocals extremely well, and I believe that recording vocals is where this microphone really shines.

Of course, it can be used for recording acoustic and classical guitars as well, which is what I used it for before getting some of the other microphones I own.

There’s a reason why the AT2020 (XLR Version) is part of almost every music studio, and that is because when taking cost-effectiveness into account, there are few microphones that can stand up to it.

The USB version is just as good, just a bit more expensive… But it doesn’t require you to purchase a separate audio interface!

Now, there’s one thing that you should consider before purchasing it, and that is the region of the world/country you’re in.

In the US, the AT2020+ is MUCH more affordable than in Europe (actually twice as much), and paying over €200 for it makes little sense to me when you can get something like the Blue Yeti, which is more expensive than the AT2020+ in the US but €50 cheaper in Europe.

You can check the current prices of the AT2020 on Amazon by clicking this link.

Rode is known for making extremely high-quality equipment at reasonable prices, and the Rode NT USB is no exception to this rule.

It comes with a pop filter, which is extremely good, a tripod desk stand, a ring mount, and a storage pouch.

The two controls on the side are for the headphone volume, which comes in handy when you want to do zero latency monitoring, and the Direct mix control between mic input and source output.

This means that you can choose to hear only what’s coming out of the PC, or to only hear the direct signal from the Mic, or a blend of those two.

Now, you might have noticed that it doesn’t come with a Gain dial, which for a mic in this price-range is just ludicrous.

You can control the levels from your PC however, but this isn’t ideal.

This microphone is pretty good for recording singing and spoken word applications such as podcasting and voice-over.

When looking at the build quality I have to say that it’s just great.

It’s got some weight to it and it doesn’t feel at all flimsy or delicate.

Like I mentioned, it includes a pop filter which is rare since most microphones don’t include one, and even though it feels a bit cheap, it’s still a free pop filter that works.

Lastly, it works on Windows and Mac OS based computers, as well as the Apple iPad.

How does it perform?

To be honest, I wasn’t as surprised as I thought I would be when trying out this mic.

For spoken word applications or for quiet singing it works super well, however when recording instruments that are a bit too loud, or any other loud sound source for that matter, even if the signal doesn’t clip, it will sound as if it’s clipping.

Also, having no Gain dial makes it a bit of a pain to set the levels correctly…

Other than that, I think that the Rode NT USB does a pretty decent job at doing what it’s supposed to do, just remember to not record very hot signals.

Now, similar to what I mentioned about the price differences in certain regions for the AT2020+, the same thing happens with the Rode NT USB.

It literally costs twice as much in certain European countries than in the US.

I have seen it in the Amazon Store in Germany for almost the same as in the US, but in Spain, and other countries, it sells for twice as much.

In this case, you could actually purchase an Audient iD14, which is an insanely good Audio Interface, plus an XLR microphone and have a much better setup for the same money.

What comes in the box?

Here’s a link to Amazon where you can check the price and the Reviews of the Rode NT USB.

Which one should you choose?

Don’t get me wrong, the Rode NT USB is a great USB mic, but it’s certainly not as good as the AT2020+ for the simple fact that not having a Gain Control is just absurd.

Still, the much better route to take would be to go for an Audio Interface and a regular XLR microphone.

In some cases, this will cost you a bit more, but you will be running a much better and flexible setup.

Here is a post about the two Audio Interfaces I’d recommend; Scarlett 2i2 vs Audient iD14. (I actually own the Audient and it’s absolutely amazing).

USB microphones are great; they are easy to use, most of them sound pretty good, etc.

The AT2020+ would be my absolute first choice, but if you can purchase the Rode NT USB significantly cheaper, then there would be absolutely nothing wrong with that!

Still, I’d recommend getting an Audio Interface and not a USB mic.

USB microphones are famous for being plug and play devices that don’t require any extra gear, such as an audio interface or mixer, to work…. 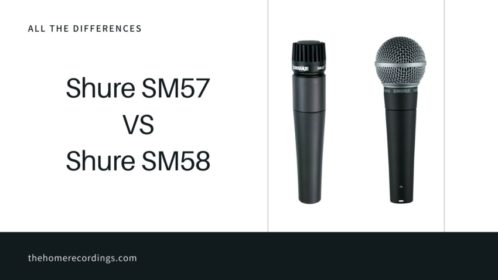 Both the Shure SM57 and the SM58 are two of the most used and best-know microphones out there. From studios to live performances all over…

Ever wonder why everyone says that tube amps sound better, louder, and warmer? Not only that, but they seem to be much more expensive than… 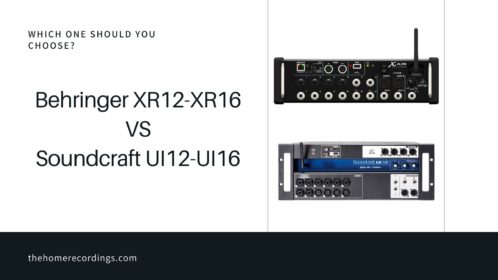 Wireless mixers are becoming more and more popular for the simple fact that you can set them up anywhere and forget about it. No more…

Both the Sure SM58 and the Audio-Technica At2020 are some of the most famous microphones out there. The reason for this is that they are…

When I was in my early teens, I decided that I wanted to start recording my guitar on top of some backing tracks, however I…