I recently wrote a post about the two other Behringer and Soundcraft mixers, which you should definitely check out…

Those mixers, however, lack one very important feature which is multi-track recording.

This is where the Behringer XR18 and the Soundcraft UI24R come in, since both of them can do everything those mixers can, while still being able to do multi-track recording.

Multitrack recording just means that every input gets recorded on-to its own track in the DAW, while with the more conventional mixers all the tracks get combined into one stereo file.

Note: Of course, having this added feature means that the mixer has a built-in Audio Interface, which increases its overall cost.

The Behringer XR18 is a digital mixer which features a 18-in/18-out USB audio interface.

This basically means that every one of those 18 inputs can be recorded on-to its own track in the DAW.

Let’s take a quick look at the Behringer XR18’s inputs and outputs:

Inputs:  16 of the inputs are XLR/TRS combo Jacks which feature their famous MIDAS preamps, and an additional 2 x TRS line inputs, as well as MIDI I/O.

The quality of these preamps is actually pretty good, providing you with an excellent signal-to-noise ratio and good headroom.

Both of the first two inputs are also Hi-Z inputs, which allow you to connect an electric guitar without the need of using a D.I. box.

The 6 aux outputs can be used to create headphone mixes, or for live monitoring…

While the “Ultranet” port, which connects to the Behringer’s P16 monitor distribution system, allows every musician to create their own headphone mix or their own monitor mix on stage.

The Behringer X-Air XR18 can be controlled via Wi-Fi -with a built-in router- or ethernet, using an Andrioid or iOS device via the X-Air App, which gives you an overview of what’s going on in the mixer.

This app works almost like a DAW and comes included with loads of effects.

Here’s how the X-Air App looks;

This feature, however, is not really intended for mixing live music, but rather conferences.

When it comes to cost-efficiency, the Behringer XR18 is one of the best wireless multitrack mixers out there…

It super affordable for what you are getting.

As far as the effects go, it comes with four built-in true-stereo (8 mono) multi-effects processors, including delay, chorus, and dynamics, as well as a 31-band EQ.

You can also choose any combination of high-end simulations of classic studio reverbs such as the Lexicon 480L and PCM70, the EMT250 or Quantec QRS.

Sadly, there is no included feedback rejection/feedback fighting on these mixers, as well as no amp simulation, which do come included with the Soundcraft mixers.

Here’s a link to Amazon where you can check the price and read the reviews of the Behringer X-Air XR18.

This wireless mixer features a 24-in/24-out audio interface, which means that every single track can be recorded separately on-to your DAW.

Let’s take a quick look at the inputs and outputs:

Inputs: It comes with 10 x XLR/1/4″ combo jacks, as well as 10 x XLR jacks all equipped with their Studer-designed preamps.

Not only that, but there’s an additional 1 x stereo RCA connection.

These inputs are designed to connect an electric guitar/bass directly to the mixer without the need of using a D.I. box.

This can definitely come in handy during live gigs where you don’t want to take guitar amps along, since these amp sims actually sound quite convincing.

And basically, every device out there can run such a browser (Chrome, FireFox, Safari, etc).

In this Image you can see how the software actually looks;

Note: It also has an Ethernet port, should you want to take wired control of this digital mixer via your computer or laptop.

Most wireless mixers require you to download an app, but with the Soundcraft mixers you just connect to the Wi-Fi they provide, and that’s it!

Not only that, but you can connect up to 10 different devices, which means that every band member can control their own effects, monitor mix, amp sim, etc.

There is even an HDMI output and an extra USB port, so that you can hook up a monitor and mouse, if you want to control it that way.

This mixer comes with the Lexicon effects, which include; reverbs, delay, and chorus.

Each channel also has Compression, de-essing, and noise-gating built in, plus a real time frequency analyzer.

Like I mentioned earlier, amp emulation for the first two inputs is also included, which provides a huge array of amps, cabinets, pedal effects, and more.

The Soundcraft wireless mixers come with an advanced feedback suppression algorithm which listens to the incoming signal and can anticipate the problematic frequencies before the feedback begins.

This feedback suppression system won’t affect the sound of the performance one bit!

Not only can you record all of the tracks directly on-to your DAW, but you can also connect an external USB drive and playback music from it.

You can check the price and the reviews of the Soundcraft UI24R on Amazon here.

The Soundcraft UI24R features feedback suppression and amp simulations, as well as USB Rec/Playback capabilities, which the Behringer XR18 doesn’t.

However, the Behringer XR18 provides MIDI In/Out, which the Soundcraft doesn’t.

Which one to choose?

I Personally prefer the Soundcraft mixers a lot more simply because of all the added features like amp simulation and feedback suppression.

However, the Soundcraft UI24R mixer is way more expensive… almost twice as much.

And this isn’t something that you can ignore.

Sadly, Soundcraft doesn’t have any other wireless mixers capable of multitrack recording other than the UI24R.

This is why, unless you know that you’re going to use the 24 inputs, as well as the amps sims, etc., I’d recommend the Behringer XR18.

At half the price, I think that it’s just a much better choice overall.

No matter which mixer you go for, you’ll get an excellent product.

I wouldn’t really recommend them that much for a home studio though, since having to use a tablet or iPad to control it can be quite the hazzle.

If you want to find out more about good home studio mixers, then check this article I wrote.

Have an excellent day!

You’re thinking about getting some studio monitors but you wonder if you really need them in order to record and mix music, since most of… 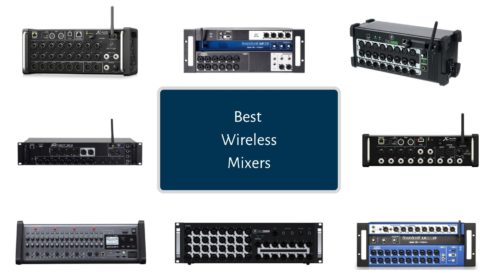 Tablet controlled-, or wireless mixers have become very popular over the last years. Being able to leave the mixer on stage near the musicians without…

Are you wondering which USB microphone to purchase? I know it can be tough to find the right one since there are dozens, if not… 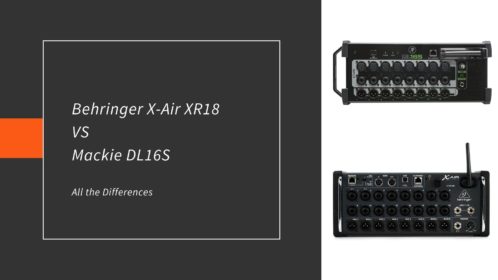 Two of the most popular Wireless mixers on the market today are the Behringer XR18 and the Mackie DL16S. Both of them are pretty good…